Judiciary
– an institution empowered to administer justice
– a system of courts that interprets and applies the law in the name of the state.
– provides a system for settlement of disputes.
– protects people’s rights.

In order to ensure Rule of Law*, the judiciary has to be independent of political influence; judges must be able to function without fear or favour.
*’Rule of Law’ means that all individuals irrespective of gender, caste, religion, region, social, political, economical status are subject to the same law.

Appointment
Legislature is not involved in the process of appointment of judges.
It is believed that this will ensure that party politics would not play a role in their appointment.

Fixed tenure
They hold office till the age of retirement. Constitution has made the procedure for removal of judges very difficult.

Financial independence
Salaries and allowances of judges are not subject to the approval of the legislature.

Immunity
Actions and decisions of court are immune from criticism.
Parliament cannot discuss the conduct of a judge, except when a resolution for his removal is being considered. 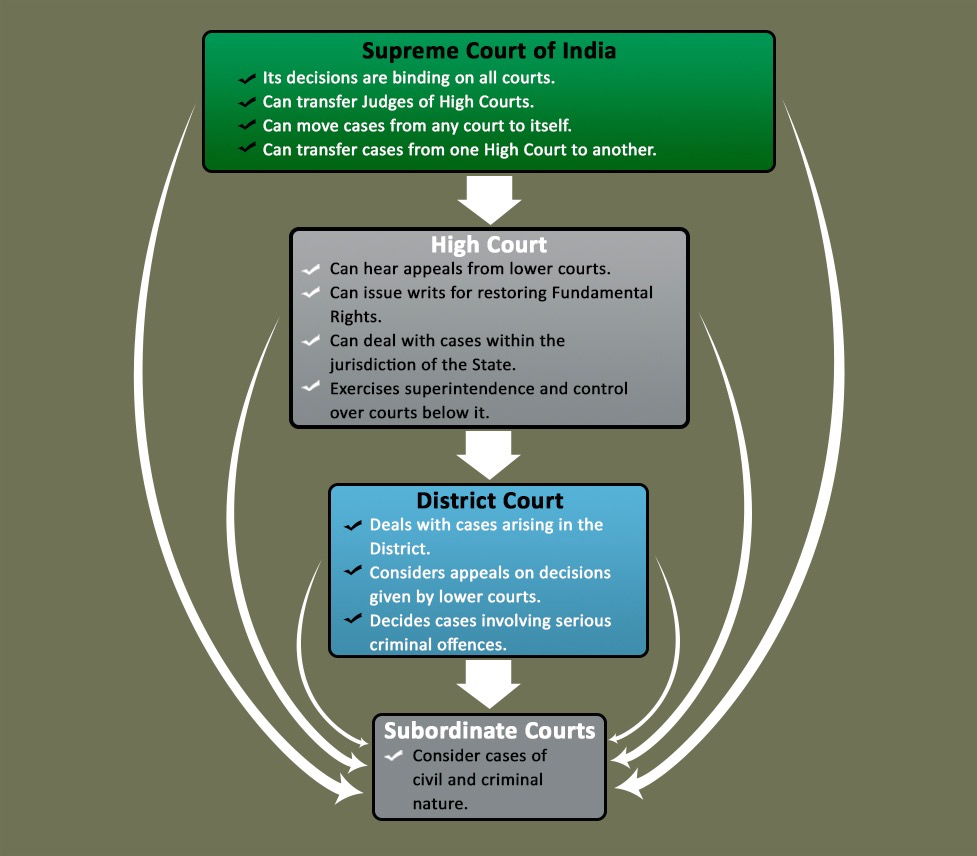 Guardian of the constitution

Original Jurisdiction means that cases can be directly considered by the Supreme Court without going to lower courts. Therefore, the Supreme Court becomes the arbitrator for cases between the Union and the states and between states.

The President of India may seek the advisory opinion of the Supreme court on important and necessary issues. This is purely advisory in nature, and the executive may or may not agree to the advice.
The Supreme court may also decline to give advisory opinion.
The utility of advisory powers is two-fold. – It allows the government to seek legal opinion on a matter of importance before taking action on it. This may prevent unnecessary litigation later. – In the light of the advice of the Supreme Court, the government can make suitable changes in its action or legislation.

The Supreme court has the power of declaring a law made by the legislature or an executive action as ‘null and void’ or ‘unconstitutional’, if it violates the provisions in the constitution or the law of the land.

Why is power concentrated in the hands of a few?

Because of our ignorance. "The concentration of power and the subjection of individuals will increase amongst democratic nations... in the same proportion as their ignorance." - Alexis de Tocqueville.

Why should you know about the way it works?

A popular Government without popular information is a Farce or a Tragedy or both. Knowledge will forever govern ignorance, and a people who want to be their own Governors must equip themselves with the power that knowledge gives. - James Madison (Paraphrased)
If citizens are to govern their own affairs, either directly or through representative government, they must be informed about how best to determine their affairs and how best to represent and execute them. - James Madison

A little about me

Hi! I’m Tina. I’m an Interested Indian. When I got a bit interested in the happenings of the world and India, I realised that I knew very little about the basics. And when I tried to learn the basics, I saw that there were very few online resources for simple learning. So I created these mind maps and simple notes for easy understanding of political concepts, especially in the Indian context. I’m not an expert. I’m a learner like you. Write to me

Sign up to receive updates straight to your inbox!